Your Guide to Healthy Living!

Remember to Bookmark the site!

Please checkout within 24 hours on purchases!

The survival of humans depends on the proper functioning of the Female Reproductive System. Further, women need to participate the reproductive process and delivering babies. Your ability as a female to conceive a biological child depends on your fertility, that starts declining in your early 30s. Besides age, several factors decrease female fertility and/or prevent you to ovulate, such as drinking/smoking, obesity, genes, medical conditions/medicine, household chemicals, extreme exercise, thyroid problems and sexual history to name a few.

Your reproductive health forms a big part of your total health, since it impacts so many different aspects of your well-being. There are plenty of steps that you could take to support your reproductive health. Amongst others, it includes tracking your monthly cycle, regular checkups, practicing safe sex and avoiding vaginal infections. Equally important, make sure that your Reproduction System gets proper nutrition.

The description below helps you to understand the importance of the Female Reproductive system, and how the system works. This will help you to make more informed female fertility, female sexual health, ovary/uterus health and women’s health supplement choices. Particularly, when your experience that your diet alone lacks in providing the nutrients needed for your Female Reproductive System to work properly.

The Female Reproductive System, also sometimes referred to as the Female Genital System, is a system of human organs that give women the ability to produce and deliver babies. The role, main functions and main organs of the system are discussed below.

The primary role of the Female Reproductive System is oogenesis, prenatal development and childbirth.

Understanding menstruation is extremely important in understanding the reproduction process. The menstrual cycle lasts around 28 days and consists of a regular series of natural changes taking place in the Female Reproductive System. These changes are regulated by female hormones and that makes childbearing possible. To elaborate, the cycle is needed to produce ovum and to prepare the uterus for pregnancy (see below). The absence of fertilizing the oocyte, resets the cycle by menstruating.

Oogenesis Function: Female oogenesis is the process of creating and nurturing female eggs (also known as oocyte). The ovaries produce the oocyte that may divide to form an ovum, the mature female reproductive cell. Usually, only one ovum per menstrual cycle is released.

Ovulation Function: Female ovulation is the discharge ovum from the ovary. After the release of the ovum, the egg moves slowly down the uterine tube (fallopian tube) to the uterus available for fertilization. Ovulation usually occurs around two weeks after a woman’s menstrual cycle starts.

Fertilization Function: The sperms in the man’s semen after deposited in the vagina, swim through the cervix and uterus to the fallopian tubes where fertilization normally occurs. Female fertilization is when the sperm penetrates and fuse with an ovum. The result of this union is a fertilized egg, known as a zygote cell. In fact, the zygote cell contains the full complement of your baby’s DNA. Fertilization kicks off prenatal development. It has to be just after ovulation, generally around two weeks into the menstrual cycle, as mentioned above.

Implantation Function: Within twenty-four hours of fertilization, the zygote cell tarts cell division and growth, while continue moving through the fallopian tube (uterine tube) and into the uterus. After a few days of cell division, the zygote cell is blastocyst when reaching the womb (uterus). Implantation is when blastocyst attaches to the endometrium, the mucous membrane lining of the uterus.

Embryo and Fetes Development Function: The embryonic period starts at the beginning if the third week after fertilization when the inner cell mass (ICM) of the blastocyst forms the embryo. This is when placental blood circulation and hormone production start making the mass of cells distinct human. The fetal period is the prenatal period from the ninth week until birth. It is during this period when the brain develops, and fetus begins to move arms and legs. The fetus will continue to develop, put on weight, and prepare for life outside the womb. The question when the fetus become a baby is debatable and it depends who you ask. Suffice to say that the fetus is considered full-term between weeks 36 and 40 and babies born full-term (preferably after) have the greatest chance of being healthy.

Lactation Function: Female lactation is the making and secretion of mother’s milk to feed an infant. Milk production in mammary glands is controlled by the prolactin hormone and begins before birth. While infant is sucking on the mother’s breast, the release of milk by the nipples is stimulated by the oxytocin hormone.

Menstruation Function: Female menstruation occurs when either the ovum is not fertilized in time, or the fertilized cell fails to implant into the uterine wall. To menstruate involves the shedding of blood and cellular debris from the lining of the uterus. 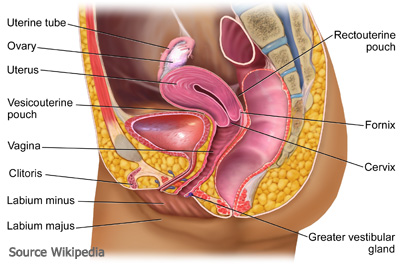 The female genital system or female reproductive system consists internal and external sex organs that is responsible for human reproduction.

The internal sex organs are the ovaries, fallopian tubes (uterine tubes in diagram), uterus and vagina. The external genital organs include the labia majora, labia minora, mons pubis, Bartholin glands and clitoris. The area containing the external sex organs is called the vulva. In addition, the placenta is an organ that connects the developing fetus to the uterine.

The best supplements for the Female Reproductive System groups are:

The best supplements for your Female Reproductive System are based on user reviews and will be continually updated. Please provide comments and submit your recommendations on supplements that work for female fertility, female sexual health, ovary/uterus health and women’s health by completing the form below.